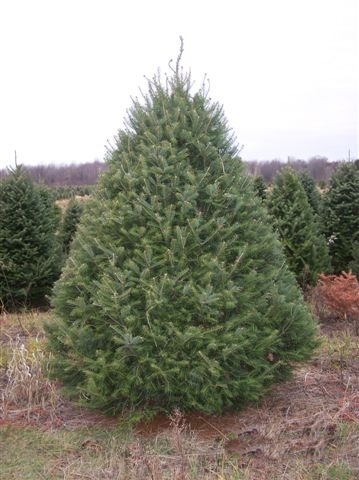 First described in 1768, balsam fir is a medium-sized tree generally reaching 40-60 feet in height and 1-1 1/2 feet in diameter. It exhibits a relatively dense, dark-green, pyramidal crown with a slender spire-like tip. The scientific name “balsamea” is an ancient word for the balsam tree, so named because of the many resinous blisters found in the bark. Balsam fir and Fraser fir have many similar characteristics, although geographic ranges of the two species do not overlap.

On lower branches needles generally occur as two-ranked (two rows along sides of the branch), 3/4 – 1 1/2 inches long, spreading and not crowded. On older branches, the needles tend to be shorter and curved upward so as to cover the upper sides of the twigs. Individual needles are somewhat flat and may be blunt or notched at the end. Needles have a broad circular base and are usually dark green on the upper surface, lighter on the lower surface. Two silvery bands of stomata (pores) are found on the lower surface.

Balsam fir has both male and female flowers (or strobili) on the same tree. Flowers are receptive in late May to early June. The species is wind pollinated, and cones mature in a single season. At maturity, cones are 2 to 3 1/2 inches long with bracts shorter than scales. The presence of these short cone bracts is a distinguishing feature when balsam fir is compared Fraser fir. Upon ripening in September to November, cones fall apart leaving an erect central core.

Balsam fir bark is thin, ash-gray, and smooth except for numerous blisters on young trees. These blisters contain a sticky, fragrant, liquid resin. Thus, the species has been sometimes referred to as “blister pine”. Upon maturity, bark may become up to 1/2 inch thick, red-brown and broken into thin scales.

The species thrives in cooler climates and demands abundant soil moisture and a humid atmosphere. It is generally found in the Canadian and Hudsonian zones from sea level to about 5,000 feet in elevation. Growth is best on well-drained, sandy loam soils that are somewhat acid. The species is tolerant of shade and may reach 150-200 years of age. Pure stands may be found in swamps, but balsam fir often occurs with white spruce, black spruce and aspen on upland sites.

As a Christmas tree, balsam fir has several desirable properties. It has a dark-green appearance, long-lasting needles, and attractive form. It also retains its pleasing fragrance. Nine to ten years in the field are required to produce a 6-7 foot tree.

Abies balsamea occurs naturally from northern Alberta to Labrador, southward to Pennsylvania. This geographical distribution is larger than for any other North American fir species. A variety of balsam fir,phanerolepis, occurs as far south as West Virginia and Virginia (38 degrees north latitude). This variety is best described as an intermediate form between balsam fir and Fraser fir although classified with balsam fir.

Most propagation is by seeds, although natural layering may occur from lower branches in contact with moist soil. A few selected cultivated forms are commercially propagated by cuttings, and grafting has also been used for special purposes. Propagation via tissue culture has been attempted but not on a large scale.

The wood is soft and brittle and has been used primarily for pulpwood. The wood is also used for light frame construction, interior knotty paneling, and crates. Wood resin in the bark blisters is the source of Canada balsam used for making of microscope slides. Resin was sold in stores as a confection prior to the advent of chewing gum, and resinous fir knots were once used as torches. A balm of balsam fir resin was used in Civil War as an external application to the injuries of combat. Balsam fir boughs are often used for stuffing “pine pillows”, with the aromatic foliage serving as a deodorant.

Moose and whitetail deer browse the foliage, while chickadees, nutcrackers, squirrels and porcupines eat the seeds. The spruce grouse uses fir forests for cover and obtains food from the needles.