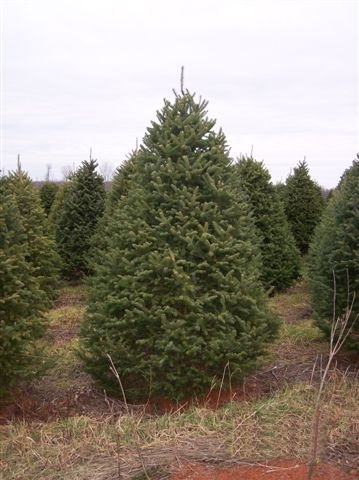 Canaan (pronounced “Ka-naan”, with emphasis on the last syllable) is a relative newcomer to the Christmas tree market. It has many similarities to both Fraser and balsam firs in growth and appearance. Unfortunately, this similarity which has led to a great deal of confusion.

In 1909, a variety of balsam fir was described in the literature as having cone scales extending from the bracts. This morphology was a deviation from typical balsam fir cones where the scales are not extended. This variety was then named “phanerolepis” which actually means conspicuous scales. The scientific name of Abies balsamea var. phanerolepis was assigned. The common names most often used were “bracted balsam fir” and “Blue Ridge fir”. Canaan fir had not, at that time, been described separately.

Bracted balsam fir is found from Labrador to Ontario, and from the coast of Maine to the higher mountains of Virginia and West Virginia. The environments in which most natural stands are found is quite similar to those of balsam fir and Fraser fir. The optimum habitat appears to be a cool climate, abundant moisture and deep, well-drained soils. Soils are moderately to strongly acidic.

In the mid 1930’s, suggestions were made by several authors that some specimens of the variety phanerolepis had a sufficient number of traits of both balsam and Fraser fir that it should not be recognized as a variety but as a separate species. These specimens were generally found in West Virginia and Virginia. One author suggested the name be changed toAbies intermedia to reflect this intermediate nature of the plants’ characteristics. The classification as a separate species has since fallen out of favor, but some commercial nurseries still market the trees asAbies intermedia.

Where does Canaan fir fit into the scheme? Canaan fir is so-named because several of the original trees with the intermediate morphology were identified from a limited area in West Virginia, generally referred to as the Canaan Valley. Taxonomically, Canaan fir is considered the same as bracted balsam fir and has the scientific name of Abies balsamea var.phanerolepis. However, growth traits of the trees from these southern regions are somewhat different than for other bracted balsam fir. Thus, there occurs a dilemma as to how Canaan fir should be classified. There are lots of opinions. The simplest solution is probably to consider Canaan fir as a special ecotype of bracted balsam fir; this ecotype having unique characteristics as a result of the environment to which it has been exposed. It is not currently considered a separate species.

Because Canaan fir is probably best identified as an ecotype, its range is somewhat undefined. Bracted balsam fir is found from sea level in the Northeast to as high as 3,700 feet in Virginia. Original Canaan fir collections for seedling production were made in a small area in West Virginia at elevations generally above 3,000 feet, although trees of this ecotype may exist in other areas.

Commercial propagation is by seeds. Information regarding other techniques is limited but it is reasonable to assume methods appropriate to the eastern fir species would be applicable.

Because of the similarity of Canaan fir to the other eastern firs, its uses are similar, although inaccessibility of stands limits the amount of wood which can be harvested.